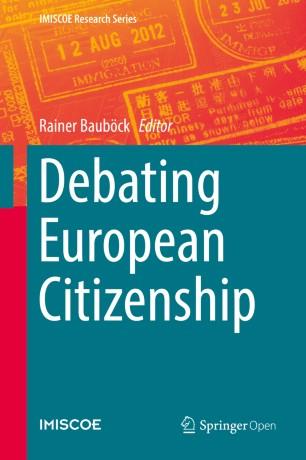 Rainer Bauböck is currently a part time professor at the Robert Schuman Centre of the European University Institute. He held the chair in social and political theory at the Department of Political and Social Sciences of the EUI from 2007 to 2018 and was Dean of Graduate Studies from 2012 to 2016. Rainer Bauböck is also a corresponding member of the Austrian Academy of Sciences and chair of its Commission on Migration and Integration Research.

His research interests are in normative political theory and comparative research on democratic citizenship, migration, European integration, nation- alism and minority rights. Together with Jo Shaw (University of Edinburgh) and Maarten Vink (University of Maastricht), he coordinates GLOBALCIT, an online observatory on citizenship and voting rights.

This open access book raises crucial questions about the citizenship of the European Union. Is it a new citizenship beyond the nation-state although it is derived from Member State nationality? Who should get it? What rights and duties does it entail? Should EU citizens living in other Member States be able to vote there in national elections? If there are tensions between free movement and social rights, which should take priority? And should the European Court of Justice determine what European citizenship is about or the legislative institutions of the EU or national parliaments? This book collects a wide range of answers to these questions from legal scholars, political scientists, and political practitioners. It is structured as a series of three conversations in which authors respond to each other. This exchange of arguments provides unique depth to the debate